The next version of the RØDECaster Pro firmware has arrived! We have consolidated months of user feedback and testing into a major update with loads of new features.

Firmware version 2.0 follows on from previous updates, which introduced multitrack recording to the RØDECaster Pro, as well as other handy features. The new update introduces over 25 powerful new features to the RØDECaster and the companion app, which are designed to make it even easier for you to make incredible sounding podcasts. The RØDECaster Pro keeps getting better!

Let’s dive into some of the new features. For a full rundown of the update, take a look at the release notes when you download the firmware. 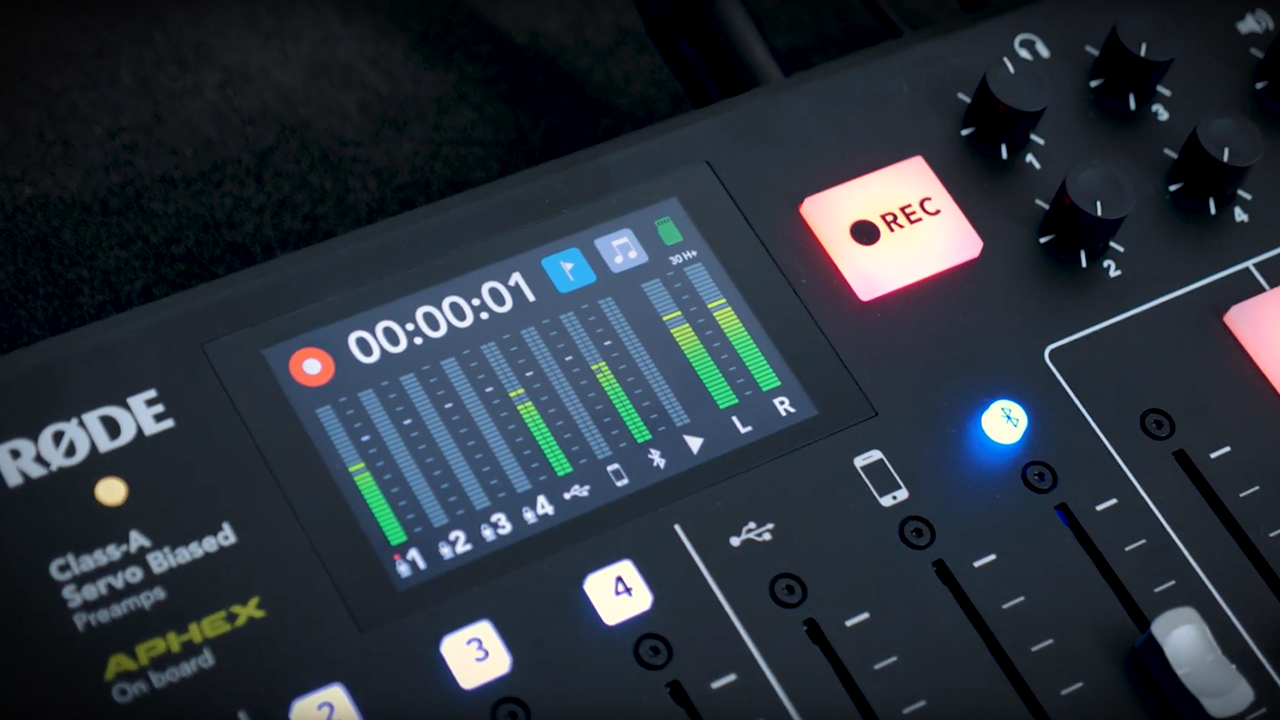 With so many to get through, we’ve split the features into two main categories: the firmware and the companion app.

One of the most common requests we’ve had from users is the ability to access podcasts stored on the microSD card directly from the unit without having to take the card out and putting it into a computer. That’s exactly what ‘Podcast Transfer Mode’ allows you to do – it essentially turns your RØDECaster Pro into a microSD card reader!

To access, choose Settings > Hardware > microSD Card and enable ‘Podcast Transfer Mode’. Once enabled, the microSD card will appear in the Finder on a Mac or File Explorer on Windows. You can also use the companion app to access and manage files as before. Note that when the RØDECaster is in ‘Podcast Transfer Mode’ all other functionality is disabled.

When you download the firmware, you will notice there is a new sound pad playback indicator button on the home screen of your RØDECaster. This icon indicates (by colour) which sound pad is currently playing, as well as how much time that pad has before the sound ends. If you have multiple pads playing at once, the icon will show the pad that will end soonest.

This icon is also a handy shortcut to the sound pad configuration screen. The new firmware allows you to modify settings that you could previously only accessed in the companion app, such as colour-coding the pads and setting the playback mode.

There is also a new playback mode called “Pause” – this allows you to pause playback by pressing the pad. The pad will blink to indicate its paused. To resume, press the pad again. To stop, press and hold the pad.

Lastly, you can now store up to 8 banks of sounds (64 in total)! Super handy if you produce multiple podcasts or your show is very sound-focused. Keep in mind that these populate dynamically – a new bank is added each time you fill up the preceding bank.

We’ve also added a number of features for those of you who are using the RØDECaster Pro in a broadcast context – live podcasts, video streaming and so on. These features accessed via the new 'Audio' screen (Settings > Hardware > Advanced > Audio).

First of all, we’ve added a few features when it comes to using the RØDECaster Pro’s monitor outputs. You can now disable the main output level control knob (Monitor Outputs > Disable Level Knob). This will bypass the level control entirely, defaulting to standard line level regardless of the position of the control knob. This is particularly handy if you are using the monitor output to feed into a recorder or live stream and want to make sure you don’t accidentally change the level.

There is also a button to automatically mute the monitor outputs when faders are open to prevent feedback when using monitors (Monitor Outputs > Automatically Mute Outputs).

Another new feature that is commonly found on broadcast consoles is the ability to switch the solo button to enable pre-fade listen mode (Channels > Enable Pre-Fade Listen). When engaged, the ‘host’ (headphone output 1) be able to will hear what is coming out of that channel at unity gain, even if the fader is completely down. This is perfect for previewing the volume or content of a channel before fading it into a recording.

Finally, the ‘host’ (channel 1) can now speak with callers on the USB, Smartphone and Bluetooth channels without the conversation being recorded or going to the monitor outputs. To enable this, press both the Solo and Mute buttons on channel 1, then both the Solo and Mute buttons on any of the channels you want to speak to (can be multiple channels if you have multiple callers).

Last but not least, the RØDECaster Pro’s audio processing engine has been tweaked to make your podcasts sound even better!

One awesome new feature in the companion app is the ability to save and  load ‘Shows’. A ‘Show’ is basically a snapshot of your RØDECaster Pro: settings, sounds, everything. These can be saved on your computer and re-loaded at any time in the future. Super handy if you produce a couple of different podcasts or your RØDECaster is being used by multiple people. This also means that you can load a ‘Show’ from one RØDECaster Pro to another – very useful if you have a studio with multiple RØDECasters!

To save a 'Show' in the companion app, head to the menu bar and choose File > Save Show. You can also save/load settings on their own (not the sounds) by clicking File > Advanced > Save/Load Settings.

Factory sounds can now be restored via the app (File > Restore Factory Sounds) and the app now has the option to automatically sync the date and time between the RØDECaster and the host computer (File > Advanced > Automatically Sync Time To Computer).

We hope you enjoy using the new RØDECaster Pro firmware. You can download it here. Happy podcasting!